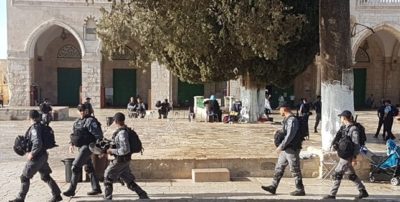 A group of Israeli settlers, accompanied by Israeli forces, stormed the Al-Aqsa Mosque on Monday, for the third time during the past two weeks of the Holy Month of Ramadan (an important annual holiday celebrated by Muslims worldwide).

The Israeli military has, during the past week alone, invaded the mosque compound twice in order to harass and intimidate worshipers.

Israeli settlers and right-wing extremist Jewish religious groups have, in recent months, increased the number and severity of their invasions of the Al-Aqsa Mosque compound, which are carried out with the full support of the Israeli military.

These right-wing Jewish extremist groups have frequently noted their intention regarding the mosque: to tear it down and erect a Jewish Temple in its place.

The right-wing group that organized the invasion also vowed to return on June 2nd to the mosque to further desecrate and deny Muslim worshipers access to the mosque. They have planned their next attack for that day because it is known as ‘Jerusalem Day’.

June 2nd is also three days before the final day of Ramadan, which is a major feast for Muslims – many of whom travel to Al-Aqsa mosque from different parts of Palestine and the Arab world for the occasion.

According to local sources, the Israeli invaders entered the mosque through the Mugrabi Gate, and they toured Al-Aqsa Square. Israeli police who accompanied the settlers took photos of Palestinians in the Square, and arrested three young Palestinians there.