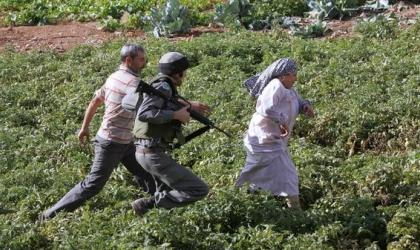 A Palestinian farmer sustained injuries in the head, on Friday night, when he was brutally assaulted by extremist Jewish settlers near the village of Artas, to the south of Bethlehem, in the occupied West Bank, local sources said.

Settlers from the Israeli settlement bloc of Gush Etzion reportedly broke into the farm of Ayman Khalil Sa’ad, who comes from Artas, while working in the farm near the village. As Sa’ad attempted to prevent the settlers from raiding his own farm, the sources said, the latter assaulted and beat him, causing him bruises in the face and eye.

He was moved of moderate injuries to a nearby emergency center for treatment, Days of Palestine reports.

Settler violence has become part of daily life under occupation in the West Bank. These actions range from blocking roads, throwing stones at cars and houses, raiding villages and farmland, torching fields and olive groves, and damaging crops and property to physical assault, and sometimes hurling Molotov cocktails or using live fire.

Hundreds of testimonies, videos and reports, as well as many years of close monitoring by human rights organizations, including B’Tselem, have revealed that Israeli security forces not only allow settlers to harm Palestinians and their property as a matter of course – they often provide the perpetrators escort and back-up.