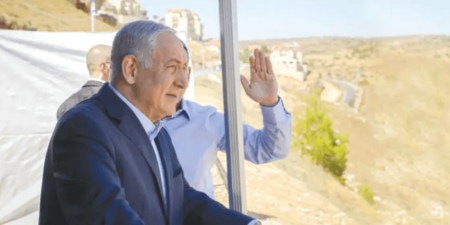 Israeli Prime Minister Benjamin Netanyahu said, on Sunday morning, that he will declare Israeli sovereignty over all settlements, in the near future.

“Remember that this is the land of Israel, our land,” Netanyahu said at the opening of the school year, in the settlement of Alcana.

“We will impose Jewish sovereignty on all settlements as part of the State of Israel. We are building new houses here,” he said.

Netanyahu reiterated statements, from last July, that he would not allow the evacuation of any settlements. “We are working hard to fortify settlement projects, which require money, determination and overcoming pressure, which all governments under my leadership, with the help of God, and with your help, have done. We will continue to do this together. ”

In response to a question about international pressures that may be formed in response to the maintenance of settlements, Netanyahu explained that “such things have existed for many years and can always be maintained.” “We face (pressures) firmly, deliberations, patience, Above all, with perseverance, our reality continues to resonate openly, and I say to all world leaders, that we are not rooted in a foreign land. On the contrary, the people of Israel in Samaria (the occupied West Bank) are at home. ”

Netanyahu said: “This is a pledge, it is not limited within the space of time, but limited because I offer in my name: can not uproot any settlement from the land of Israel, and will not be” uprooted “any political plan. We’ve finished this nonsense, you all know what we got when we moved out of the settlements, peace? We got terrorism and missiles. ”

Israeli settlements, which are housing units built on Palestinian land in the occupied West Bank and Jerusalem, and illegal under international law, PNN reports.