Israeli Soldiers Abduct 20 Palestinians, Injure Many Others, In West Bank 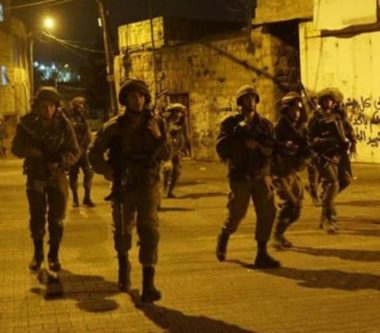 Israeli soldiers invaded, on Monday at dawn, several Palestinian areas in the occupied West Bank, searched and ransacked homes, and abducted twenty Palestinians, including a lawyer and the wife of a political prisoner.

Media sources in Nablus, in northern West Bank, said the soldiers invaded and ransacked the home of a political prisoner, identified as Amir Eshteyya, and abducted his wife, attorney Aman Mansour, in addition to confiscating their car.

The invasion into the property came as dozens of soldiers, and hundreds of illegal colonialist settlers, invaded the eastern area of Nablus city, especially Joseph Tomb, before the army fired many live rounds, rubber-coated steel bullets and gas bombs at dozens of Palestinian protesters.

Medical sources said the soldiers shot two young men with live fire, and caused dozens of Palestinians, including many in their own homes, to suffer the effects of teargas inhalation.

The soldiers also detained Palestinian journalists and prevented them from documenting the invasion.

The soldiers also invaded Teqoua’ village, east of Bethlehem, and drove in its streets and neighborhoods.

In Ramallah governorate, in central West Bank, the soldiers searched homes in Abu Shkheidim village, north of Ramallah city, and abducted Mohammad Odah Ladadwa, in addition to Ibrahim Ayyoub Ma’rouf, who was taken prisoner from his home in Deir Abu Mashal town, west of Ramallah.

In Hebron, in southern West Bank, the soldiers invaded the al-‘Arroub refugee camp, north of the city, searched several homes, and abducted Ammad Mohammad Jawabra and Shawqi Khatib, in addition to Mohammad Jawad al-Wawi, who was taken prisoner from his home in Halhoul town, also north of Hebron.

It is worth mentioning that dozens of soldiers also invaded Jayyous town, east of the northern West Bank city of Qalqilia, and distributed leaflets warning the resident of further severe measures, if they do not stop protesting the ongoing Israeli occupation and violations.

On Sunday at night, the soldiers abducted four young Palestinian men in Silwan town, south of the Al-Aqsa Mosque in occupied Jerusalem, after assaulting and wounding them.