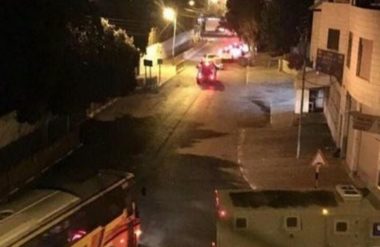 Several armored Israeli military jeeps invaded, on Sunday at night, the eastern areas of the northern west Bank city of Nablus, injured one Palestinian with live fire and caused many others to suffer the effects of teargas inhalation.

They added that many Palestinians hurled stones at the soldiers who fired many live rounds, rubber-coated steel bullets and gas bombs.

Medical sources said one Palestinian was shot with a live round in his thigh, before he was rushed to Rafidia Hospital in a moderate-but-stable condition, while many others suffered the effects of teargas inhalation.

While the biblical Patriarch Joseph is revered by Jews, Muslims, Christians, and Samaritans alike, the Israeli army allows Jews to visit as part of organized pilgrimages, despite the site being in Area A, under full Palestinian control.