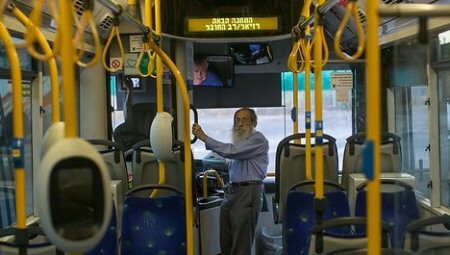 An Israeli hospital in city of Ashkelon, in southern Israel, is forcing Palestinians to get off public buses to undergo a security check before allowing the vehicles to enter on hospital grounds, while Israeli passengers continue their passage uninterrupted.

Haaretz news outlet reported, according to Ma’an, that the Association for Civil Rights in Israel and Physicians for Human Rights have documented that Palestinians who take Dan Badarom’s line 18 have to get off the public bus at the entrance to the Barzilai Medical Center and undergo a security check.

After the security check, they are then picked back up when the bus exits the hospital to continue on its route.

Haaretz published a video that showed a daily bus ride on line 18, during which the bus is seen stopping at the entrance to the hospital, a female security guard entering and then a number of Palestinian passengers exiting the bus with the guard, who doesn’t check any other passengers or force them to exit the bus.

The bus driver explained to one of the passengers that those who are forced to exit the bus “are Arabs who work with a permit here, in Israel. They enter the hospital, it’s security. They are checked. She took them off and now I’ll pick them up.”

Reportedly, if Palestinians do not exit the bus themselves, they will be forced by the security guard off of the bus.

Dan Badarom and the Barzilai hospital confirmed the details to be correct.

Dan Badarom said that it follows the instructions it receives from the hospitalL “On the part of the route where the bus enters Barzilai hospital in Ashkelon, we are subject to the instructions of its security department and obligated to act according to those instructions.”

The Barzilai Medical Center said that “in the case of Israeli citizens and residents, no further security check is conducted. In the case of green ID holders, who are residents of the West Bank and Gaza Strip, the passenger is asked to accompany the security guard outside of the bus in order to conduct a security check of their belongings, including a check with a metal detector to ensure they are not carrying weapons or explosives.”

Physicians for Human Rights warned the hospital about continuing their methods and said, “A medical institution is first and foremost obligated to the rules of medical ethics and respecting human dignity, and therefore is supposed to prevent any racist behavior within its gates.”

Physicians for Human Rights also called on the Israeli Health Ministry to inform the hospital that “security issues cannot and will not be used as an excuse for its commitment to medical ethics and ensuring equality.”