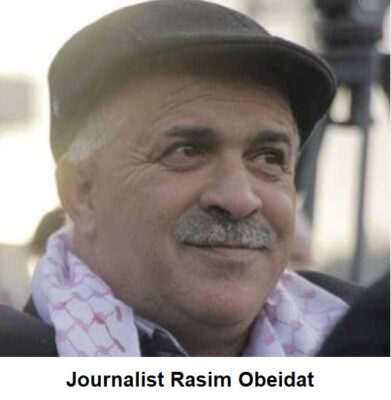 Media sources in Jerusalem have reported that the soldiers invaded Wadi al-Jouz and Shu’fat, before storming and searching homes, and abducted Ibrahim Abu Sa’ida and Firas Oweida.

In addition, illegal Israeli colonists carried out a provocative march at the entrance the al-‘Isawiya town, north of Jerusalem, and attempted to attack several Palestinians.

The soldiers also invaded the home of a senior Palestinian journalist, writer and political analyst, former political prisoner Rasim Obeidat, in Jabal al-Mokabber in Jerusalem, and abducted him.

The soldiers broke into his home while he was being interviewed on TV through Zoom conference.

In Tubas, in northeastern West Bank, the soldiers abducted a former political prisoner, identified as Mustafa Abu Arra, 63, from his home in Aqaba town, north of the city.

In Nablus, in northern West Bank, the soldiers invaded and ransacked dozens of homes in several parts of the governorate, before abducting seven Palestinians.

The soldiers also abducted Yasser Badrasawi from his home in the Al-Quds Street in Nablus city, in addition to Ahmad Ribhi Hanani and Ayed Hanani, from Beit Dajan village, north of Nablus, Mo’tasem Nasouh Eshteyya from Salem village, east of Nablus, and Moayyad Ahmad Ghazi from Jama’in town, southwest of Nablus.

In Tulkarem, in northern West Bank, the soldiers abducted Ala’ Khalil Tammouni, 22, and former political prisoner Ezzeddin Mohammad Abu Dayya, 34, from their homes in Nur Shams refugee camp, north of the city.

In Hebron, in southern West Bank, the soldiers abducted six Palestinians, including one journalist, from their homes.

It is worth mentioning that the soldiers also abducted a journalist, identified as Hazem Naseeruddin, during protests in Hebron, on Tuesday evening.