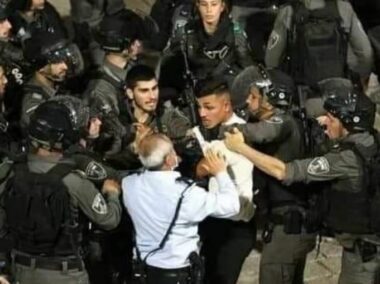 Israeli soldiers abducted, late on Thursday at night and on Friday at dawn, at least fifty-three Palestinians from several neighborhoods of the Old City of occupied East Jerusalem, after they protested the dozens of assaults and violations carried out by illegal Israeli colonialist settlers.

Media sources said the soldiers, and the police, arrested fifty Palestinians in and around the Old City, during ensuing protests that erupted after the colonists assaulted dozens of Palestinians, cars, and shops.

At least twenty Israeli officers were injured, and that some of them were moved to hospitals in the city, during confrontations with Palestinian protesters.

The protests started on Thursday evening, and continued through the morning hours, Friday, especially in the Old City, the French Hill, Sheikh Jarrah, and al-Misrara. It is worth mentioning that the Palestinian Red Crescent said at least 105 Palestinians, including many women and children, were injured; twenty-two of them suffered moderate wounds.

Furthermore, dozens of Israeli colonists continued their marches in Jerusalem, especially on the roads between East and West Jerusalem, and assaulted dozens of Palestinians while chanting racist slogans, including the infamous “death to Arabs.”

Eyewitnesses said the colonists were stopping cars and demanding the ID cards of the passengers to ensure that they are Palestinians, before assaulting them.

In related news, the soldiers closed Baba Hotta gate, one of the main gates leading to the Al-Aqsa Mosque, and prevented the Palestinians from crossing while on their way to the holy site.