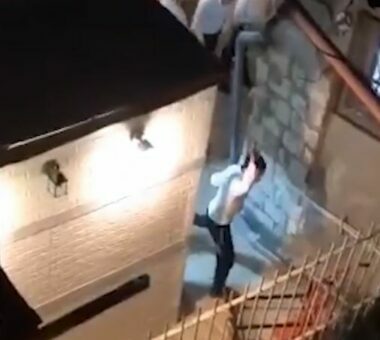 Dozens of illegal Israeli colonialist settlers attacked, on Friday at dawn, many Palestinian homes, and opened fire at them, in occupied Jerusalem.

Eyewitnesses said the colonists hurled stones at the Palestinian homes, while some of them fired rounds of live ammunition, causing damage.

They added that the attacks targeted the Palestinian homes near the Hebron Gate, and in the Old City.

The colonists were marching while chanting racist slogans, and calling for expelling the indigenous Palestinians, in addition to the racist chant “Death to Arabs,” amidst calls for further assaults against the Palestinians and their property in the occupied city.

In related news, Israeli soldiers abducted, late on Thursday at night and on Friday at dawn, at least fifty-three Palestinians from several neighborhoods of the Old City of occupied East Jerusalem, after they protested the dozens of assaults and violations carried out by illegal Israeli colonialist settlers.

Furthermore, the soldiers closed the Baba Hotta gate, one of the main gates leading to the Al-Aqsa Mosque, and prevented the Palestinians from crossing while on their way to the holy site.