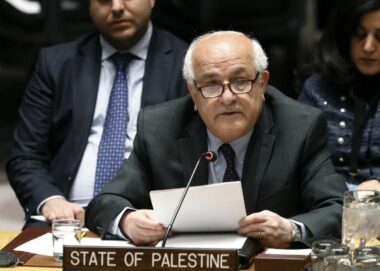 Speaking before the UN Security Council’s virtual session on the Situation in the Middle East, including the Palestinian question, he said the recent few days saw Israeli occupation forces briefly detain candidates for the Palestinian elections in occupied Jerusalem and banning them from holding a press conference to discuss the matter.

“That there is an urgent need to ensure that Israel does not put obstacles in the way of the Palestinian elections,” said Mansour, as he called upon international partners to overcome all difficulties and obstacles in the way to holding the elections, especially in East Jerusalem, the occupied capital of the State of Palestine.

He added, “We have met all the requirements [for the elections], and there is full readiness to hold the elections that must include East Jerusalem according to the agreements signed, as was the case in the 2006 and 1996 elections.”

He said, “It would have been possible to alleviate the suffering had Israel lifted the restrictions imposed on the Palestinian territories and facilitated the entry of vaccines, instead of just providing vaccinations to workers and residents of East Jerusalem without paying attention to the Palestinian people in the West Bank and Gaza Strip.”

Mansour welcomed the recent report of the UN Secretary-General which affirms that settlement construction and expansion in the Palestinian land impede the establishment of the Palestinian state and the achievement of the two-state solution.

He urged the International Quartet to support more positive steps in order to restore negotiations and ensure that the parties adhere to the principle of achieving peace and security. Mansour said that President Mahmoud Abbas’ initiative on holding an international peace conference falls within the same framework.