Israeli Soldiers Abduct A Child in Bil’in Near Ramallah 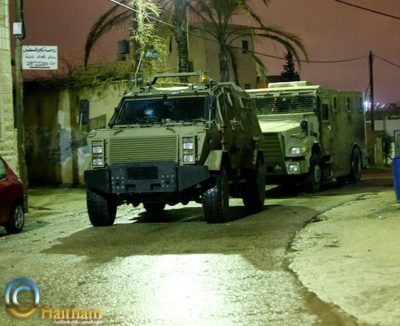 Israeli soldiers invaded, on Wednesday at dawn, the village of Bil’in, west of the central West Bank city of Ramallah, searched homes and abducted a Palestinian child, in addition to summoning another Palestinian for interrogation.

Abdullah Abu Rahma, the coordinator of the Popular Committee against the Wall and Colonies in Bil’in, said the soldiers invaded and searched homes in the village, and abducted Waqqas Mansour, 17.

He added that the soldiers invaded the home of Malek Yassin, 18, but he was not there, and the soldiers gave his family a military warrant summoning him for interrogation in ‘Ofer prison and military base.

Abu Rahma stated that the village is subject to frequent Israeli military invasions, and violent searches of homes, as the military is trying to stop the weekly popular protests against the Annexation Wall and colonies. He added that Bil’in villagers, along with Israeli and international peace activists, are preparing for next Friday’s central protest marking the twelfth anniversary of popular struggle against the illegal Israeli Wall, colonies, land theft polices, and the ongoing occupation of Palestine.