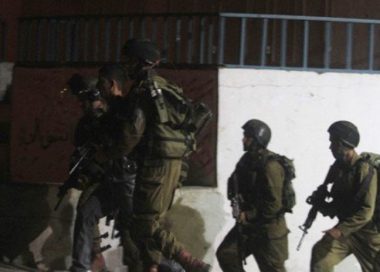 Israeli soldiers abducted, on Wednesday at dawn, at least twenty Palestinians from their homes, after invading and violently searching them, in different parts of the West Bank, and confiscated fifteen Palestinian cars.

The soldiers also confiscated twelve Palestinian cars in Husan town, west of Bethlehem, and three cars in Bil’in village, west of Ramallah, allegedly for being used to “transport protesters.”

Abdullah Abu Rahma, the coordinator of the Popular Committee against the Wall and Colonies in Bil’in, said the soldiers invaded and searched homes in the village, and abducted Waqqas Mansour, 17.

He added that the soldiers invaded the home of Malek Yassin, 18, but he was not there, and the soldiers handed his family a military warrant summoning him for interrogation in ‘Ofer prison and military base.

|More on Bil’in Invasion: Israeli Soldiers Abduct A Child in Bil’in Near Ramallah|

In addition, the army claimed that it located, and confiscated, a home-made weapon during searches of homes in Kufur Ni’ma village, west of Ramallah.

In the southern West Bank district of Hebron, the soldiers invaded and searched homes, and abducted five Palestinians.

The soldiers abducted Raed Mohammad Ekhlayyel, 40, who was shot and injured by Israeli fire two months ago, during the funeral procession of Khaled Ahmad Ekhlayyel, who was killed by the soldiers on October 30, 2016, in Beit Ummar town, north of Hebron.

The soldiers also abducted Mohammad Ghazi Za’aqeeq, 20, and Mohammad Mahmoud Awad, 16, after breaking into their homes and searching them, in Beit Ummar.

In Jenin, in the northern part of the occupied West Bank, the soldiers invaded Faqqou’a village, east of the city, and abducted a teacher and a documentary director, identified as Abdullah Ali Enkheili, 28.

Also in Jenin, the soldiers invaded Zibda village, southwest of the city, and summoned owners of several stores and a car wash facility, for interrogation at the Salem military base.

The Palestinian Prisoners Society (PPS) stated that fifteen of the abducted Palestinians, in the West Bank, have been identified as: