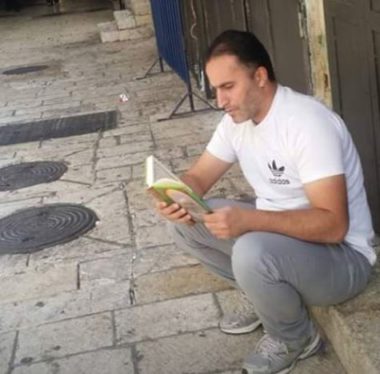 Israeli soldiers abducted, on Sunday morning, a young Palestinian man from the Al-Aqsa Mosque, in occupied East Jerusalem, and took him to an interrogation and detention facility.

The Palestinian, Nitham Abu Rammouz, was detained when dozens of soldiers, officers and groups of illegal colonialist settlers stormed the courtyards of the Al-Aqsa Mosque, and conducted provocative tours, after the soldiers removed many Palestinians from the holy site’s area.

The police closed the area to the Palestinians, and refused to allow them to enter or leave the holy site, until the tours were concluded.

It is worth mentioning that Abu Rammouz was detained in several past similar occasions in the holy site, and frequently received orders denying him the right to enter Al-Aqsa for various periods of time.

Furthermore, the soldiers invaded Hebron city, and near by Yatta town, in the southern part of the occupied West Bank, searched homes, and summoned a former political prisoner for interrogation.