Israeli Soldiers Abduct A Palestinian Immediately After His Release From Prison 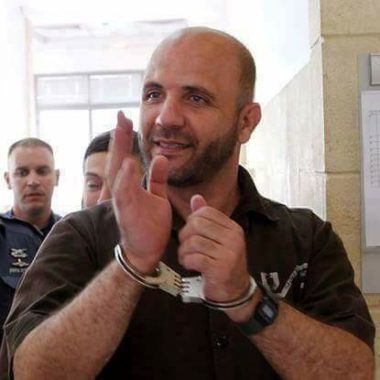 Israeli soldiers abducted, on Thursday morning, a Palestinian political prisoner from occupied East Jerusalem, immediately after his release from an Israeli prison, after he was detained for seven years.

Amjad Abu Assab, the head of the Detainees’ Parents Committee in Jerusalem, said the soldiers rearrested his brother, Yacoub Mahmoud Abu Assab, 46, instantly after his release from the Negev Desert Detention Camp.

He was near the main gate of the detention camp, and was rearrested before he stepped out.

He added that the military phoned the family telling them about Yacoub’s abduction, and informing that that he will be transferred to the al-Maskobiyya interrogation center, in West Jerusalem.

It is worth mentioning that Abu Assab was abducted in late 2011, for what Israel called “holding a senior political role within the Hamas movement” in Jerusalem.

He was repeatedly abducted and imprisoned by Israel, spending a total of fifteen years in various prisons.

Abu Assab said Israel deliberately rearrests many detainees immediately after their release, to prevent them and their families from celebrating their freedom, and to keep them unaware of might happen next.