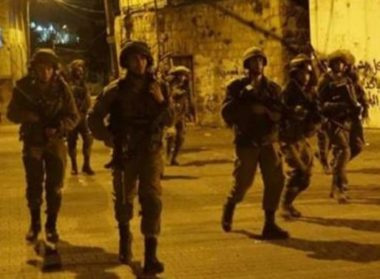 Israeli soldiers abducted, on Thursday at dawn, at least twelve Palestinians, from their homes, in several parts of the occupied West Bank, and illegally confiscated dozens of thousands of Shekels from a few homes. Among the abducted Palestinians is a father, and two of his sons, in addition to a journalist and his son.

The soldiers rearrested a Palestinian detainee, identified as Yacoub Abu Assab, 46, from occupied Jerusalem, instantly after his release from the Negev Desert Detention Camp, after finishing a seven-year prison sentence.

In Ramallah, in central West Bank, the soldiers abducted Mohammad Shreiteh, along with his sons Yasser and Tha’er, after breaking into their home and searching it, in the al-Mazra’a al-Gharbiyya town, northwest of the city.

It is worth mentioning the Mohammad is the head of the Media Department at the Palestinian Detainees’ Committee, in Ramallah.

Furthermore, the soldiers invaded many homes in Deheishe refugee camp, south of the city, and abducted a journalist and a former political prisoner, identified as Nidal Abu Aker, along with his son Mohammad.

In Jenin, in northern West Bank, the soldiers searched many homes and abducted Mohammad Sa’id Zakarna and Majeed Mohammad Alawna.

It is worth mentioning that the soldiers also invaded the home of Jamal Hanaisha, from Wad an-Naqqar area, in the northern West Bank city of Qalqilia, and violently searched it, before illegally confiscating 1.650 Shekels (approximately 445 Dollars).