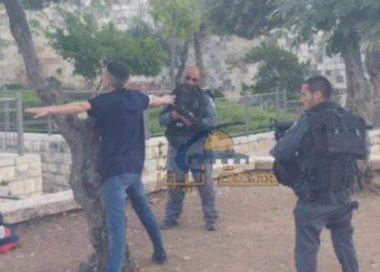 Israeli soldiers abducted, Wednesday, a young Palestinian man in Bab al-‘Amoud area, in the Old City of occupied East Jerusalem, and took him to an interrogation center.

The Palestinian was stopped by soldiers, heavily deployed in the area, before he was cuffed and taken to an interrogation center. His name remained unknown at the time of this report.

It is worth mentioning that dozens of soldiers, and mounted officers, who were deployed in the area, stopped and searched many young men, and investigated their ID cards.

In related news, the police released Ehab Abu Ghazala, a guard of the Al-Aqsa Mosque, in Jerusalem, and issued an order preventing him from entering the holy site for six months, in addition to forcing him to pay a fine.

Ghazala was taken prisoner from the mosque compound last Friday.