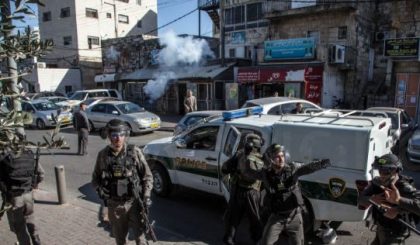 Israeli soldiers abducted, on Sunday at dawn, a young Palestinian man from the at-Tour neighborhood, overlooking the Old City, of occupied East Jerusalem.

The abducted Palestinian has been identified as Faisal Shabana; he was cuffed and blindfolded by the soldiers, before being moved to an interrogation center in the city.

In related news, the Israeli District Court in Jerusalem decided, on Saturday evening, to place Mohammad Abu al-Hummus, under further interrogation until Tuesday.

Abu al-Hummus, a member of the Follow-Up Committee in the al-‘Isawiyya town, in occupied Jerusalem, was abducted by the army on Friday evening, for documenting and filming Israeli soldiers invading the town.