Army Injures A Child, Abducts A Man, In Kufur Qaddoum 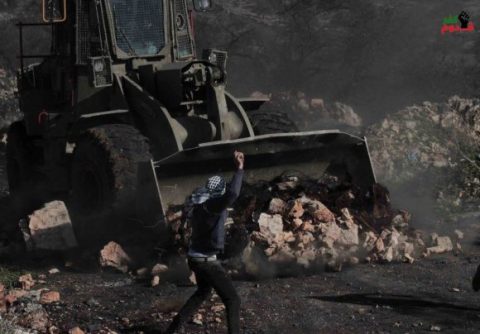 Israeli soldiers attacked, Saturday, the weekly protest against the Annexation Wall and colonies in Kufur Qaddoum town, east of the northern West Bank city of Qalqilia, wounding a child in his arm, and also abducted a man.

Medical sources said the child, identified as Awad Mansour, 12, was shot with a tuber-coated steel bullet in his arm, and received the needed medical treatment.

The soldiers also abducted Ma’moun Eshteiwy, 40, after chasing him and many young men in the town, especially between the homes.

The Palestinians were protesting the ongoing Israeli violations and colonialist activities, in addition to demanding the army to reopen the town’s main road, which was closed more than 14 years ago, to enable easy access to colonists driving to and from Kedumim illegal colony, built on privately-owned Palestinian lands.

Clashes took place between many youngsters, who hurled stones and empty bottles at the invading army vehicles, and the soldiers who fired live rounds, rubber-coated steel bullets and gas bombs.

The residents of Kufur Qaddoum called on human rights groups to intervene and stop the ongoing Israeli violations and escalation, and the excessive use of force against the weekly protests, usually held Fridays and Saturdays.

On Friday, the soldiers used excessive force against the protest in Kufur Qaddoum when hundreds of residents, Israeli and international peace activists marched while chanting against the ongoing occupation, and the Israeli attacks in Um al-Hiran.