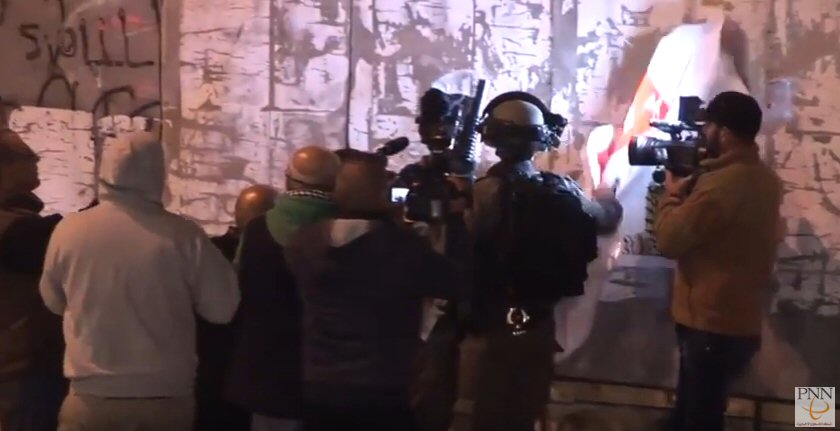 A group of Palestinian activists in the occupied West Bank city of Bethlehem burned, on Friday, 20/1/2017, pictures of  new US President Donald Trump in his first day of taking office because of his support to Israel, and especially his promises to move the US embassy in Israel from Tel Aviv to Jerusalem, which has never been attempted by any previous US administration.

The activists gathered at the northern entrance of Bethlehem city, near the apartheid wall which surrounds the Christian holy site to show the newly elected president how much the Palestinian people are suffering under Israeli occupation, they said.

Mohammed al-Lahham, member of the Revolutionary Council of Fateh and one of the people who participated in the march, told PNN that this action is to remind Trump that Jerusalem is an occupied city, according to international  law, and is a Palestinian/Arabic city — not American — and, without it, there will be no solutions, and his promises will destroy the peace process in the  Middle East.

AL–Lahham added that this protest carries a letter to Trump that the Palestinian, Arab, and  all free peoples of the world will not accept the moving of the US embassy to Jerusalem because it constitutes a clear bias by US administration in its brutal support for Israeli occupation of Palestinian land.

AL-Lahham also said that the protest carries a message to  Arab and Islamic streets, and all liberals of the world, telling them that there is a need for solidarity with the Palestinian people in order to stop this move, which is considered a pause against the rights of the people and the holy sites which also belong to Arab nations.

He ended his talk by saying that Trump is supporting, by his move, Jewish Daesh (ISIL), noting that the occupation government which calls for a “Jewish state” is one not fully differentiated from the Islamic State organization in Syria and Iraqi Daesh, who call for ideological identity, noting that the decision to move the US embassy from Tel Aviv to Jerusalem undermines all love of justice, peace and freedom, and encourages more terror in the region.

Political activist Mahmoud Zawahra told PNN that burning US President Donald Trump pictures is a warning message to the new American administration not to manipulate the feelings and rights of the Palestinians.

Zawahra added that the city of Jerusalem is a Muslim, Christian and Palestinian occupied city, and was recognized by various US administrations which also refused to move the embassy to Jerusalem for de adess

Zawahra explained that Trump promises  full support for the extremist Israeli occupation government, noting that the event is a warning message to the new US president that Jerusalem is the capital of the Palestinians.

For his part, Munther Amira, Chairman of the Higher Coordinating Committee Against the Wall and Israeli Sttlements in Palestinian land said, in an interview, that this event comes to confirm that the Palestinian people reject the racist policies and inhumanity pursued by the new US president.

Amira said that the Palestinian people will fight by all means and at various political and diplomatic levels, in cooperation with all the free world countries, to keep Jerusalem as the capital of Palestine.