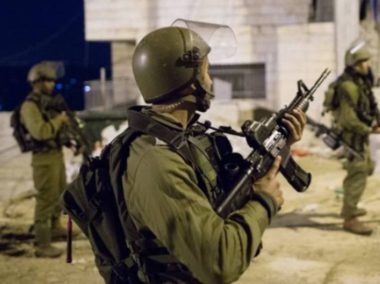 The Palestinian Prisoners’ Society (PPS) has reported that Israeli soldiers abducted, on Tuesday at dawn, eighteen Palestinians, including three children, and a young man with special needs, in several parts of the occupied West Bank.

The PPS said the soldiers stormed and ransacked dozens of homes across the West Bank, and interrogated many Palestinians.

One of the abducted Palestinians, Mahdi Farouq Abu Haniyya, 36, is a Palestinian with special needs, from Azzoun town, near Qalqilia, in northern West Bank.

The soldiers also installed roadblocks, stopped and searched dozens of cars, interrogated passengers and drivers while inspecting their ID cards.

The soldiers also invaded and ransacked the family home of Elias Saleh Shahin, 22, as killed by Israeli soldiers, Monday, near an illegal colony, north of Salfit, in the occupied West Bank.