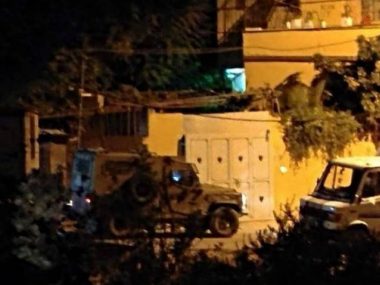 Israeli soldiers abducted, overnight and at dawn Tuesday, at least fifteen Palestinians in different parts of the occupied West Bank, after invading their homes and searching them.

In Hebron city, in the southern part of the West Bank, the soldiers invaded many homes, and abducted Mousa Rajabi, and Osama Monther Fannoun, who was previously shot by the army.

The soldiers also abducted Homam Abdul-Jabbar Othman, 17, from his home in Jenin refugee camp, in the northern West Bank city of Jenin.

In addition, the soldiers invaded and searched many homes in Shu’fat refugee camp, in occupied East Jerusalem, and abducted five young Palestinian men.

It is worth mentioning that undercover Israeli soldiers have abducted, late on Monday at night, two Palestinians from Nablus governorate, after ambushing them in the ar-Ram town, north of Jerusalem.

The army claimed that the two Palestinians intended to sell two “Carlo” automatic rifles, and moved them to an interrogation facility.