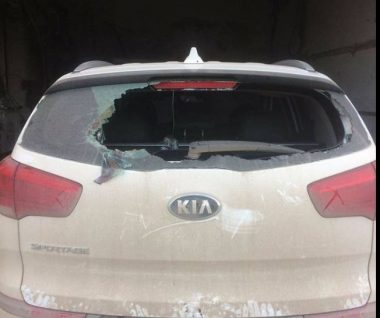 Israeli soldiers invaded, on Friday at dawn, ‘Allar town, north of the northern West Bank city of Tulkarem, searched and ransacked homes, and abducted five Palestinians from the same family, in addition to illegally confiscating cash and assaulting many residents.

Moayyad Taqatqa, a father of one of the abducted Palestinians, said dozens of soldiers stormed and violently searched his home, causing property damage, before abducting his child, Yazan, 17, and illegally confiscated 17.400 Shekels, 750 Jordanian Dinars and 600 US Dollars. Moayyad added that the soldiers also stormed and ransacked the surrounding homes of his brothers, and assaulted his nephew, a former political prisoner, identified as Arafat Nizar Taqatqa, causing a fracture in one of his arms, before he was rushed to Thabet Thabet Hospital, in nearby Tulkarem, city.

The soldiers also smashed the windows of his car, and stole spare parts, before abducting his brother, Eyad Taqatqa, 40, his son Mohammad Eyad Taqatqa, 20, in addition to Nihad Ma’rouf Taqatqa, 52, and Ma’rouf Nizar Taqatqa, 36.