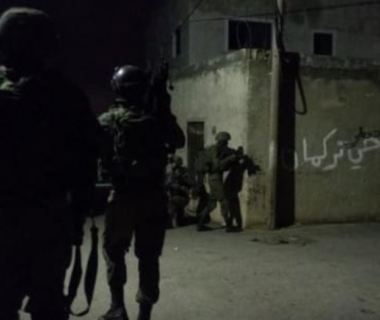 Dozens of Israeli soldiers invaded, on Monday morning, Jenin refugee camp and the al-Yamoun town, in the northern West Bank governorate of Jenin, injured three Palestinians, in addition to causing many others to suffer the effects of teargas inhalation, and abducted five.

Media sources in Jenin said the soldiers shot a young man, identified as Ahmad Maher al-Ghoul, with a live round in his leg, and Mohammad Sobhi Matahen with a rubber-coated steel bullet in the leg, in Jenin refugee camp.

They added that the soldiers also rammed Amin Zeidan Zakarna with their jeep while the army was withdrawing from the refugee camp, before he was rushed to Khalil Suleiman Governmental Hospital in Jenin city.

Dozens of Palestinians suffered the effects of teargas inhalation and received the needed treatment by local medics.

The soldiers also invaded the ransacked several homes in the ath-Thahra area, in Jenin.

On Monday at dawn, the soldiers abducted eleven Palestinians from their homes, in several parts of the occupied West Bank, the Palestinian Prisoners’ Society (PPS) has reported.