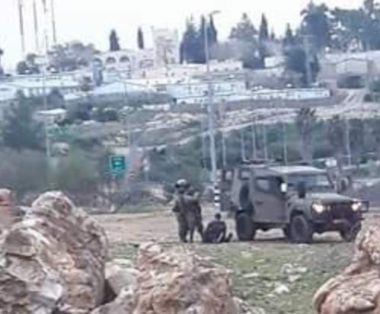 Israeli soldiers abducted, on Saturday at night and on Sunday at dawn, four young Palestinian men in the West Bank governorates of Hebron, Qalqilia and Ramallah.

Media sources in Hebron said the soldiers abducted Mohammad Ahmad al-Awawda, 21, from the al-Burj town, south of Hebron, in the southern part of the West Bank, after stopping him at the Container Roadblock, north of Bethlehem.

The Palestinian was on his way to the Al-Quds University, in Abu Dis town, east of occupied Jerusalem.

Furthermore, the soldiers abducted Mo’men Hasan an-Natsha, in the Shuhada Street area, in the center of Hebron city.

The soldiers also installed many roadblocks on main roads leading to Hebron city, in addition several villages and towns, before stopping and searching dozens of cars, and interrogated many Palestinians while inspecting their ID cards.

Furthermore, the soldiers invaded and searched homes in Azzoun town, east of the northern West Bank city of Qalqilia, and abducted a young man, identified as Abdul-Rahman Saleh ‘Odeili.