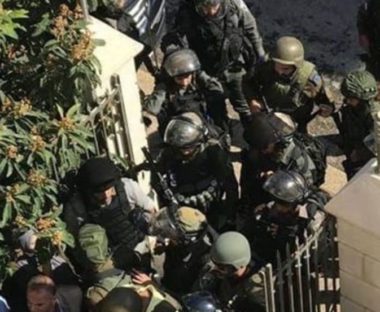 Dozens of Israeli soldiers and police officers invaded, Sunday, the offices of the Palestinian Ministry of Jerusalem Affairs, in Jerusalem governorate, and assaulted Palestinians, including staff members.

It added that the soldiers also fired many gas bombs at the Palestinians, hurled gas grenades into the offices.

The attack is part of Israel’s attempts and violations aiming at preventing the Palestinians from having any form of official officers, and organizations, in the occupied city.

Israel Internal Security Minister Gilad Erdan said Israel will prevent any Palestinian move in Jerusalem to “maintain its sovereignty on the city.”

Nearly a month ago, soldiers and employees of the Israeli Health Ministry invaded a clinic run by the United Nations Relief and Works Agency (UNRWA) in the Sahera Gate area, in the Old City of occupied East Jerusalem.