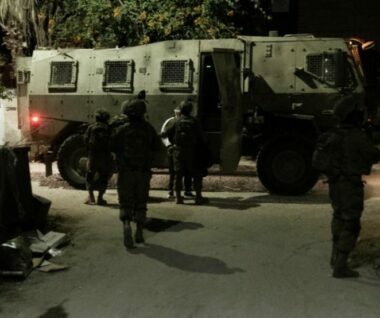 On Friday dawn, Israeli soldiers abducted four young Palestinian men from their homes near Ramallah and Nablus in the occupied West Bank.

Media sources said the soldiers abducted Ala’ Haroun Rimawi, Mahmoud Emad Rimawi, and Abdul-Karim Wael Rimawi and took them to an unknown destination.

On Thursday, the soldiers killed Dia’ Mohammad Rimawi, 16, from Beit Rima, after shooting him with live fire in the nearby Aboud village.

According to the Health Ministry, the child’s death brings the number of Palestinians killed by Israeli soldiers and colonizers since the beginning of this year to 217, 165 of them in the West Bank and 52 in the Gaza Strip.