Israeli Soldiers Abduct Four Palestinians In Ramallah, One In Bethlehem 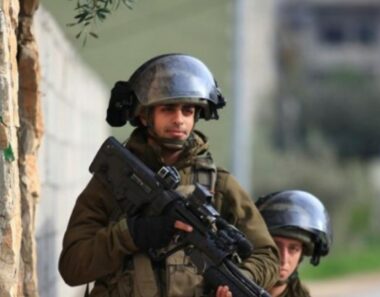 On Thursday dawn, Israeli soldiers abducted four Palestinians, including one child and two former political prisoners, in the Ramallah and Al-Biereh governorate, in the central West Bank and a young man in Bethlehem.

In the al-Mughayyir village, northeast of Ramallah, the soldiers abducted Atef Morad Na’san, 19, from his home.

In Bethlehem, south of occupied Jerusalem, the soldiers invaded the Aida refugee camp north of Bethlehem city and abducted Khaled Aqel Mustafa, 40, after invading his home and ransacking it.

The soldiers also closed and surrounded the area of the Secondary School for Boys at the entrance of the refugee camp.