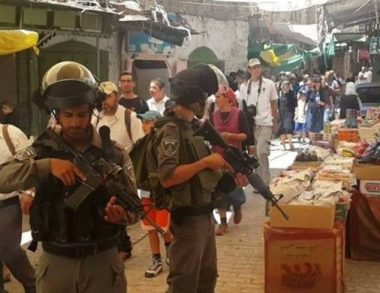 Israeli soldiers abducted, Sunday, four Palestinians, including two teenagers, in Hebron and Bethlehem, and distributed demolition orders targeting a farm and structures, in Jerusalem, in the occupied West Bank.

The Hebron office of the Palestinian Prisoners’ Society (PPS), in the southern part of the occupied West Bank, has reported that the soldiers abducted Mos’ab Bahjat al-Jamal, 17, near the Ibrahimi mosque, in the center of the city.

It added that the soldiers claimed the teenager “carried a knife,” and took him to an unknown destination.

Furthermore, the soldiers invaded the al-‘Isawiya town, in the  center of Jerusalem, and handed demolition orders targeting a farm, and several structures, allegedly for being built without permits.

The Bethlehem office of the PPS said the soldiers abducted Mohammad Ibrahim Da’dou’, 25, and his brother, Mahmoud, 19, in addition to Mohammad Khader Abu ‘Ammouss, 17.