Israeli Soldiers Abduct Four Palestinians, Including A Child, In Hebron 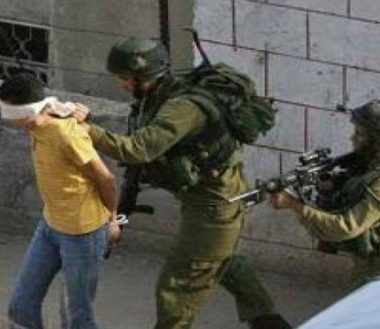 Israeli soldiers invaded, on Monday at dawn, Hebron city and several villages and towns, searched and ransacked many homes and abducted four Palestinians, including one child.

Media sources in Hebron said the soldiers abducted Firas Yacoub Natsha, 12, from his home in the Old City of Hebron.

They added that the army also abducted Nasr Mohammad Rajoub and Younis Rajoub, from the al-Kum village, southwest of Hebron.

In addition, the soldiers invaded Beit Ummar town, north of Hebron, and the as-Seer nearby village, south of the town, searched homes and abducted Yasser Awad Za’aqeeq, 27, before moving him to Etzion military base and security center, north of Hebron.

The soldiers also invaded many neighborhoods in Hebron city, in addition to the towns of Bani Neim, Deir Samit, Doura and ar-Reehiyya, and installed many roadblocks, before stopping and searching dozens of cars and interrogated many Palestinians while inspecting their ID cards.

The soldiers also installed a roadblock at Hebron’s northern road, before stopping and searching dozens of cars, and interrogated many Palestinians.

On Sunday evening, the soldiers invaded ‘Aseeda area, in Beit Ummar, and fired many live rounds, rubber-coated steel bullets and gas bombs, in addition to forcing many stores shut, after the soldiers failed to abduct a Palestinian, they ambushed in that area.

The soldiers also attacked local activist Mohammad Awad, who was documenting the invasion and violations, and took him to the military tower at the main entrance of the town.

Awad said the soldiers tried to accuse him to “carrying a knife,” but had to release him because he, and other Palestinians, were documenting the unfolding events, which proved the falsehood of the army’s allegation.