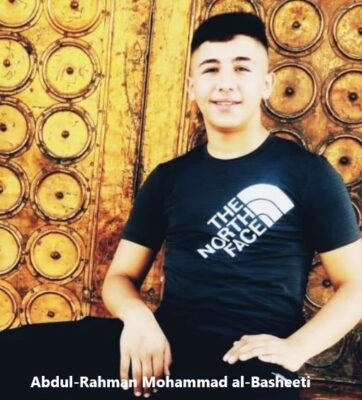 Israeli soldiers abducted, on Sunday evening, four Palestinians, including a husband and his wife, from the Old City of occupied East Jerusalem.

Eyewitnesses said the soldiers invaded the Bab Hotta area, before abducting Ahmad Abu Ghazala and his wife, from their home. The two were taken to an interrogation facility in the city.

The soldiers abducted Mohammad Najeeb, from the Old City, while he was at work in Tel Aviv.

In addition, the soldiers abducted a child, identified as Abdul-Rahman Mohammad al-Basheeti, in front of his home in the Old City.

It is worth mentioning that Abdul-Rahman is a former political prisoner, who was just released a few months ago, and was also forced out of occupied Jerusalem for ten days.

In related news, an Israeli court in Jerusalem ordered a detained Palestinian child, identified as Othman Ahmad Jalajel, under further interrogation until this coming Thursday.

Jalajel was abducted on November 11th, and was instantly moved to an interrogation facility.

On Monday at dawn, the soldiers abducted eighteen Palestinians from their homes in several parts of the occupied West Bank, after the army invaded and ransacked dozens of homes, and interrogated many Palestinians while inspecting their ID cards.