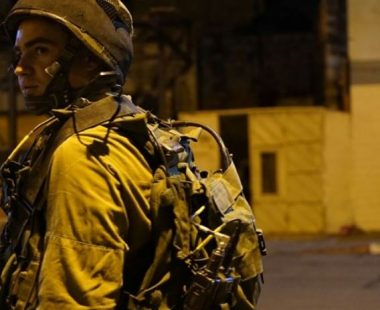 Israeli soldiers abducted, on Tuesday at dawn, nine Palestinians, from their homes, in different parts of the occupied West Bank.

In Biddu town, northwest of Jerusalem, the soldiers abducted one Palestinian, identified as Mohammad Sa’id Sheikh, 25.

Furthermore, the soldiers abducted Adham Shalabi, in Tulkarem, in the northern part of the West Bank.

In Hebron governorate, in the southern part of the West Bank, the soldiers abducted Islam Tamim Khatib, 24, from Qeizoun area in Hebron city, and Mahmoud Suleiman Amro, 24, from Kharsa town, south of Hebron.

The soldiers also invaded the home of a political prisoner, identified as Ziad Awwad, in Ethna town, west of Hebron, and searched it.

Furthermore, the soldiers invaded and searched the home of Marwan al-Qawasmi, who was killed by army fire on Tuesday, September 23, 2014, in addition to stores, owned by Bassel Abu al-Halawa, in Habayel Reyah area.

In addition, the soldiers installed roadblocks on the entrances of several villages, towns and refugee camps, in addition to Hebron city, before stopping and searching dozens of cars, and interrogated many Palestinians while inspecting their ID cards.