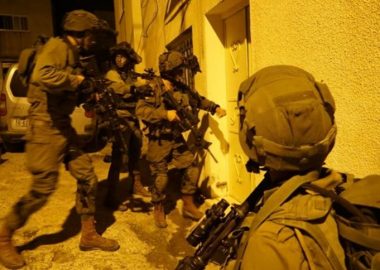 Israeli soldiers abducted, overnight and on Tuesday at dawn, at least fourteen Palestinians, including five young women, in several parts of occupied East Jerusalem, in the West Bank, and took them to many and interrogation centers.

The soldiers abducted the head of Silwan’s Assembly of Institutions, Fawzi Sha’ban, and a young woman, identified as Aseel Hassouna, from Silwan.

The soldiers also abducted the a senior political leader Fateh movement in Jerusalem, Hatem Abdul-Qader, after invading his home in Beit Hanina neighborhood, north of Jerusalem.

They also invaded homes in the African Neighborhood, in Jerusalem’s Old City, and abducted two young women, identified as Mais Firawi and Ro’a Balala, in addition to a young man, identified as Ali Firwai.

The soldiers abducted Rawan Mousa Arafat, and her brother Arafat, from the al-‘Isawiya town, in the center of Jerusalem, after breaking into their home and violently searching it.

The army also abducted Abdul-Mottaleb Abu Sbeih, from his home in the Old City of Jerusalem, and Essam Khatib, from Hizma town, northeast of Jerusalem, after breaking into their homes.

It is worth mentioning that Khatib is the head of the Palestinian Central Bureau of Statistics, in Jerusalem.

On Monday at night, the soldiers invaded the ar-Ram town, north of Jerusalem, and abducted a young man, identified as Mohannad al-Louzy.

The soldiers also attacked several children while playing in the neighborhood, and sprayed them with pepper-spray, wounding Zoheir’s son, Hamza, who was taken to a local clinic.

In related news, the army abducted two young men, who remained unidentified at the time of this report, from Bab al-‘Amoud (Damascus Gate) area, after the soldiers assaulted and wounded them.