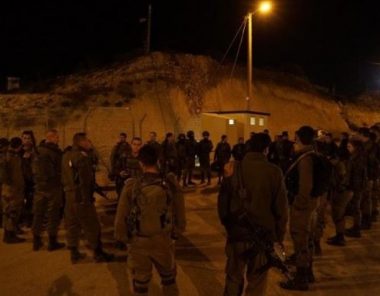 Israeli soldiers abducted, on Monday at dawn, 43 Palestinians, including a husband and his wife, from several parts of the occupied West Bank, including occupied East Jerusalem.

The Maan News Agency has reported that an Israeli military spokesperson confirmed to their agency that the soldiers arrested 43 Palestinians but did not release all their names.

Two of the abducted Palestinians are a husband and his wife, from the al-‘Isawiya town, in the center of occupied Jerusalem.

The Palestinians who have been officially identified are:

It is worth mentioning that, according to detailed statistics, released at the end of February 2018, by the ad-Dameer Prisoner Support and Human Rights Association, Israeli is holding 6119 Palestinian detainees in several prisons, detention camps and interrogation centers.

450 detainees, including six elected legislators, are held under arbitrary Administrative Detention orders, without charges or trial, in addition to 61 female detainees, and 320 children.

Israeli soldiers carried out, on Monday at dawn, massive invasions and violent searches of homes in several parts of the occupied West Bank, and abducted at least nineteen Palestinians, including children.

In occupied Jerusalem, the soldiers abducted eleven Palestinians, including a couple and their two children.

The Palestinian Prisoners’ Society (PPS) said dozens of soldiers invaded al-‘Isawiya town, in the center of the city, broke into and ransacked many homes and abducted Bassel Mahmoud, his wife Amna Mahmoud, in addition to their sons Mo’men and Ma’moun.

It added that the soldiers also abducted Haitham Shadi ‘Obeid, his brother Hussein, in addition to Mohammad Ahmad ‘Atiya and Daoud Yousef ‘Atiya.

In Hebron, in the southern part of the West Bank, the soldiers also invaded and ransacked homes, and abducted Ehab No’man Rajabi.

Two children, identified as Mohammad Nabil al-Qeeq, 16, and Ayham Wa’el ‘Ajarma, 16, were taken prisoner from their homes in the al-‘Arroub refugee camp, north of Hebron.

The soldiers also invaded several surrounding villages and towns, and installed military roadblocks, before stopping and searching dozens of cars, and interrogated many Palestinians while inspecting their ID cards.

In Bethlehem office of the PPS said dozens of soldiers, including undercover units, invaded Deheishe refugee camp, south of the city, abducted Abdullah Nayef Ramadan, 28, after storming and searching his home.

The soldiers also stormed the Al-Moghrabi Mall, on the Jerusalem-Hebron road, in the opposite direction of Deheishe, and assaulted the owner, Ismael al-Moghrabi, and a customer, identified as Yasser Abdul-Majid Obaidullah, 49, and confiscated surveillance equipment.

In related news, several armored Israeli military vehicles, including bulldozers, invaded Palestinian lands near the border fence, between Rafah and Khan Younis, in the southern part of the Gaza Strip, and fired dozens of live rounds.

The invasion was carried out by three tanks and three armored bulldozers, which left Sofa military base across the border fence, and advanced 150 meters into Palestinian lands, before uprooting sections close to the border.

Israeli military drones were also flying over various parts of the Gaza Strip throughout the invasion.