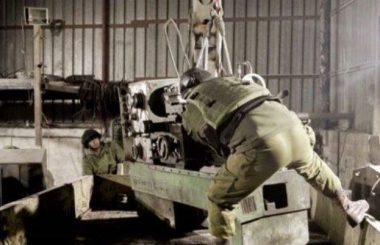 Israeli soldiers abducted, on Sunday at dawn, seven Palestinians from various parts of the southern West Bank governorate of Hebron, and shut down a blacksmith workshop, after confiscating some of its machines and tools.

Media sources in Hebron city said the soldiers abducted four Palestinians from the city, three of them have been identified as Rafat Sharabati, Shadi Edrees and Wa’el Qfeisha. It is worth mentioning that Wa’el is the brother of Taher Qfeisha, who was killed by Israeli army fire in 2004.

The soldiers also confiscated a car belonging to Luay Oleyyan Taweel, after invading his home and searching it.

Furthermore, the soldiers invaded a blacksmith workshop, owned by Ayyoub Karaki, in Shiokh village, and confiscated some of its machines and tools, allegedly, for being used to “manufacture weapons.” The soldiers weld the workshop shut, and placed a sign stating that “it will never be opened again.”

The abducted young men have been identified as Ziad Mohammad Bahar, 38, Sabri Ibrahim Awad, 23, and Ramzi Ahmad Ekhlayyel, 27, the brother of Khaled Ekhlayyel, 30, who was killed by the army on October 30th 2016.

The army also invaded the home of Roweida Bajes Sleibi, 55, and briefly detained her, in addition to assaulting her son, Ala’, 26, who is a former political prisoner. The soldiers were searching for her son, Ahmad, 23, and demanded the family to locate him, and pressure him into turning himself in to the army at the Etzion military base.

Furthermore, the soldiers detained a former political prisoner, identified as Khaled Khalil Sabarna, 25, and repeatedly kicked and beat him, before confiscating his ID card.

It is worth mentioning that the soldiers also abducted seventeen Palestinians, in occupied East Jerusalem, and a child in Bethlehem.