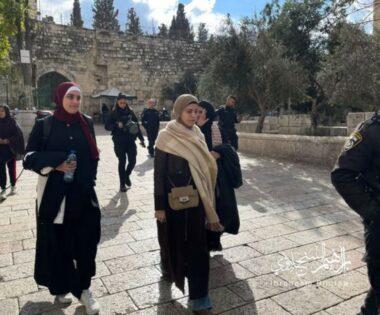 Media sources said the soldiers, at the Za’tara military roadblock south of Nablus, in the northern West Bank, abducted a young man, Nour Waddah Hanani, from Beit Dajan village east of Nablus and took him to a nearby military base.

In Al-Aqsa Mosque in Jerusalem, the soldiers abducted three young women from the holy site’s courtyards and took them to a detention center.

The three young women have been identified as Shaima’ Rawajba, Rand Jawhari, and Janin Dabbous; they were taken prisoner for carrying Palestinian flags in the courtyards of Al-Aqsa Mosque.

In related news, an Israeli court in occupied Jerusalem remanded five Palestinian children from Silwan town, south of the Al-Aqsa Mosque in Jerusalem, until December 28.

The children, Mansour Al-Abbasi, Amin Al-Abbasi, Mustafa Al-Abbasi, Mohammad Al-Abbasi, and Khalil Al-A’war, were abducted from their homes in the Batan Al-Hawa neighborhood in Silwan, on November 1. They have since been held without charges.

After the soldiers abducted them, the children were sent to court and were ordered under interrogation, and today, the court decided to remand them another time without setting a timeframe.

Furthermore, the soldiers abducted a young man at the Qalandia terminal, north of Jerusalem before closing it in both directions.

In related news, the soldiers shot three Palestinians, including one child, with expanding bullets in Al-Biereh city, in the central West Bank. The soldiers also injured six Palestinians near Nablus.

On Tuesday dawn, Israeli soldiers abducted three Palestinians and violently searched many homes near Hebron and Nablus in the occupied West Bank.

Also, the soldiers injured several Palestinians and invaded the homes of former political prisoners in Arraba town, south of Jenin in the northern West Bank.