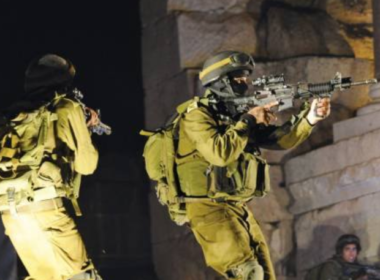 The PPS office in Qalqilia, in northern West Bank, said the soldiers invaded the city, before storming and ransacking a local shop, and abducted its owner, Saed Jamal al-‘Arabi, 35.

The soldiers also fired many gas bombs and concussion grenades at Palestinian protesters in the refugee camp.

During the invasion, the soldiers detained Rifat Shqeir and his son Amro, in addition to Najeeb Mustafa Moqadi and his son Karam, but released them a few hours later.

The soldiers also invaded the home of the mayor of az-Zawiya, Na’im Hammouda, before searching the property, and summoned him for interrogation.

The soldiers fired many gas bombs and concussion grenades at Palestinians, protesting the invasions, and installed many roadblocks in and around the town, in addition to various villages and towns in Salfit governorate.

It is worth mentioning that Israeli military surveillance drones have been constantly flying over the area for the third consecutive day.