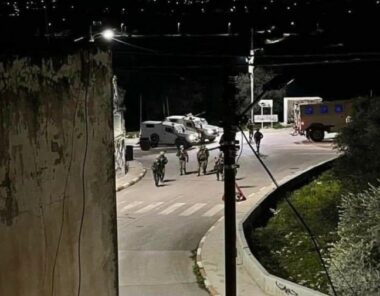 On Tuesday at dawn, Israeli soldiers abducted seven Palestinians, including two children, from their homes in the governorates of Ramallah, Jenin, Nablus, and Hebron, in the occupied West Bank.

They added that the soldiers abducted a young man, identified as Omar Mahmoud Ghawanma, in addition to two children, Dia’ Tirawi, 16, and Omar Ghwanma, 16, from their homes in the refugee camp.

The soldiers also invaded Nabi Saleh and Beit Rima, west and northwest of Ramallah, and drove through various neighborhoods before withdrawing.

In Jenin, in the northern part of the occupied West Bank, the soldiers invaded the al-Yamoun town, west of the city, searched and ransacked a few homes before abducting two young men, Mohammad Hani Abu al-Haija and Monir Awni Houshiyya.

The invasion led to protests before the soldiers fired a few live rounds, gas bombs, and concussion grenades; no injuries were reported.

During the invasion into the town, the soldiers confiscated surveillance recordings from one home after storming and ransacking the property.

On Monday evening, the soldiers injured several Palestinians in the al-Khader town, south of Bethlehem, south of occupied Jerusalem in the West Bank.

In related news, the Israeli police abducted a former political prisoner, identified as Majd Adnan Ibrahim, from the Jenin refugee camp, in Jenin governorate while visiting Kafr Kanna town in the Galilee.

On Monday at dawn, the soldiers abducted three Palestinians from Jenin and Hebron governorates in the northern and southern parts of the occupied West Bank.