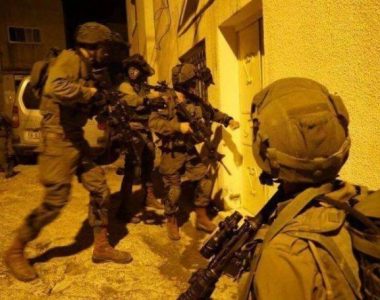 Israeli soldiers abducted, on Tuesday at dawn, thirteen Palestinians, including a senior political leader of the leftist Popular Front for the Liberation of Palestine (PFLP), during extensive and violent searches of homes in several parts of the occupied West Bank.

The soldiers also distributed leaflets in the al-Am’ari refugee camp, in the central West Bank city of Ramallah, warning “further restrictions and ongoing invasions,” if the Palestinians continue their protests.

In addition, the army said some of its military jeeps were attacked with stones and Molotov Cocktails in the al-Khader town, south of Bethlehem, and claimed to locate a pistol during searches in the West Bank.

The soldiers also started bulldozing and uprooting Palestinian lands in Immatain town, east of the northern West Bank city of Qalqilia, to expand the illegal Emanuel colony, which was built on private lands.

It is worth mentioning that the army started bulldozing the lands, 15 Dunams, a month ago, but the owner, Fawzi Nasser Ghanayem, managed to obtain an order from the Israeli High Court, stopping the destruction on his property, but the army resumed the war despite the injunction.

Names of Palestinians who were abducted by the army at dawn: