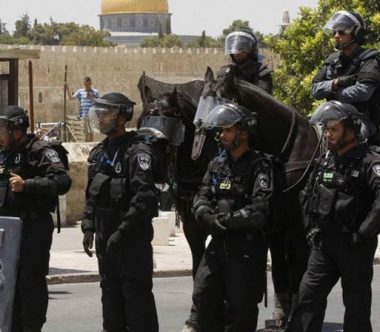 Israeli soldiers abducted, Wednesday, six Palestinian women in front of one of the gates leading to the Al-Aqsa Mosque, in occupied Jerusalem.

The sources stated that Naheda and Salsabeel were taken prisoner just meters away from the gates of the Al-Aqsa Mosque.

The rest of the detained women were taken prisoner after returning to a police roadblock, to retrieve their ID cards, which they had to leave with the soldiers in order to be allowed into the Al-Aqsa Mosque.

It is worth mentioning that Naheda is the sister of Sheikh Raed Salah, the head of the Islamic Movement in the northern part of the country.

He was repeatedly abducted and imprisoned by Israel, and is frequently denied access to the Al-Aqsa Mosque.

This is the second time Naheda is denied access to the holy site in one month, and was previously one of many women, who received orders forbidding their entry into the mosque.

On August 11, the army abducted Qoteiba Suleiman Abu Shaqra, 20, and his brother Hasan, 19, while leaving the Al-Aqsa Mosque, through Bab Al-Asbat (The Gate of the Tribes.) They are the sons of Montaha Emara, a sister of Sheikh Raed Salah.