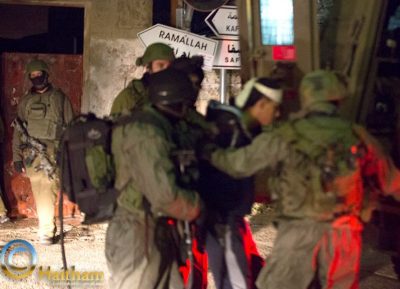 Israeli soldiers abducted, on Friday at dawn, six young Palestinian men in the West Bank governorates of Ramallah, Hebron and Jerusalem, after the army invaded and ransacked homes and stores, and confiscated surveillance recordings.

The Palestinian Prisoners’ Society (PPS) has reported that the soldiers invaded and ransacked many homes and stores, before violently searching them, and interrogated several Palestinians, while inspecting their ID cards.

In Ramallah, in central West Bank, the soldiers abducted two young men; one of them identified as Jubran Ahmad Jubran, in Ein Yabrud village, east of the city.

The two were taken after the soldiers stormed stores, and smashed many doors, before confiscating surveillance recordings.

In Hebron, in southern West Bank, the soldiers abducted Hosni Najjar, after breaking into his home, and searching it, in Taffuh village, west of the city.

The soldiers also abducted Qoteiba Mohammad Nawaj’a, from his home in Yatta town, south of Hebron.

Furthermore, the soldiers abducted a former political prisoner, identified as Tareq Ashour, from Hebron city, in southern West Bank, after stopping at the Container military roadblock, northeast of Bethlehem.

In occupied Jerusalem, the soldiers invaded and searched homes, and abducted a young man, identified as Amer Zidani.