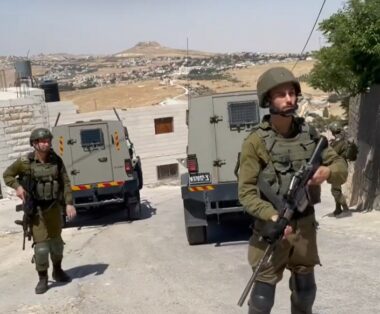 On Thursday dawn, Israeli soldiers invaded and searched many homes in several parts of the occupied West Bank and abducted six Palestinians, including one child, only twelve years of age.

In the southern part of the West Bank in Hebron, the soldiers invaded the Abu Kteila neighborhood in the city, searched homes, and abducted a young man Bara’ Mohammad Qawasmi.

Furthermore, the soldiers invaded an area between Biddu and al-Jeeb towns, northwest of Jerusalem, and closed the iron gate on the main roads leading to many nearby villages and towns.

Many Palestinians protested the invasion before the soldiers fired gas bombs and concussion grenades.

In Jenin, in the northern West Bank, the army deployed many military vehicles and dozens of soldiers along the Annexation Wall on lands in Zabbouba, Taybeh, Aneen, and Rommana and prevented Palestinian workers from reaching the military gates of the wall.