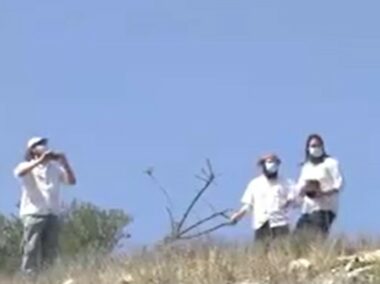 On Thursday, groups of paramilitary illegal Israeli colonizers attacked Palestinians while picking their olive trees in their orchards east of Nablus, while Israeli soldiers destroyed a water pump south of the city in the northern part of the occupied West Bank.

Daghlas added that the colonizers chased the Palestinians and hurled stones at them while trying to force them out of their lands.

In addition, illegal colonizers and soldiers invaded Palestinian lands near Burin village, Madama, Orif, and Asira al-Qibliya villages, south of Nablus, before the army used a bulldozer to place a sand mound on the main water pump.

Daghlas said the pump is essential to the residents as it provides more than 20.000 Palestinians and their agricultural lands with the needed water.

On Wednesday, a group of paramilitary Israeli colonizers attacked Palestinian farmers picking their olive trees in Jamma’in village north of the central West Bank city of Salfit, wounding one.