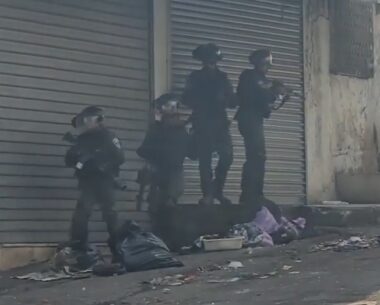 The Palestinians marched, protesting the latest Israeli escalation, including the increasing assaults by the paramilitary colonizers before the soldiers attacked them with live rounds, rubber-coated steel bullets, and gas bombs.

The processions were held at the main entrance of the Al-Fawwar refugee camp and Kharsa village, south of Hebron, the Al-Arroub refugee camp, north of the city, in the Ras Al-Joura area in the center of Hebron city.

They chanted against the escalating violations against the Palestinians in several parts of the occupied West Bank, especially in Nablus, Jenin, and Jerusalem, including the killing of Odai Tamimi, 22, near Jerusalem. The protesters also called for ongoing resistance until liberation and independence.

The Israeli army has been looking for the Palestinian after holding him responsible for the death of an Israeli soldier, Noa Lazar, 18, and the serious injury of a security guard at a military roadblock near Shu’fat.

It is worth mentioning that, a day before the soldier’s death, October 8, the army killed Ahmad Mohammad Hussein Daraghma, 24, and Mahmoud Moayyad Sous, 18, in Jenin, in the northern part of the occupied West Bank.

On October 11, an Israeli soldier, Ido Baruch, 20, succumbed to serious wounds he suffered in a shooting targeting a large group of Israeli colonizers, guarded by dozens of soldiers, marching near Nablus, in the northern part of the occupied West Bank.