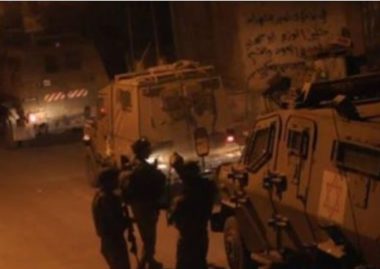 Israeli soldiers abducted, overnight until dawn hours Thursday, at least ten Palestinians, including one woman, from their homes in several parts of the occupied West Bank, the Palestinian Prisoners Society (PPS) has reported.

The soldiers invaded and ransacked the home of political prisoner, Omar Barghouthi, and the father of Saleh Barghouthi, 29, who was killed by the army on December 12th, and interrogated Saleh’s mother, and other members of the family, for several hours.

In occupied Jerusalem, the soldiers invaded Hizma town, northeast of the city, abducted Kifah Salahuddin, the mother of a political prisoner, identified as Mohammad Salahuddin, and released her several hours later.

Also in Jerusalem, the soldiers abducted four Palestinians, identified as Rafat Tareq al-‘Isawi, his son Fadi, Ahmad Abu Rmeila, and two others who remained unidentified at the time of this report.