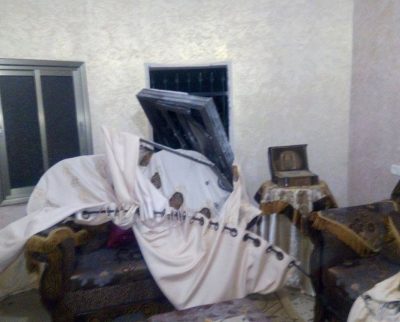 Israeli soldiers abducted, on Tuesday at dawn, at least ten Palestinians in Qalqilia, Jenin and Salfit governorates, in the occupied West Bank, and confiscated a laptop from the home of a former political prisoner in Bethlehem.

The Qalqilia office of the Palestinian Prisoners Society (PPS) has reported that the soldiers invaded and searched several homes in the city, and abducted Abdul-Fattah Hijazi, 15, Khaled Fayeq Hassan and Mohammad Jamil Qar’aan.

The soldiers also shot a young man with rubber-coated steel bullets, after many Palestinians protested the invasion.

In addition, the soldiers invaded and ransacked many homes in Sielet al-Harithiyya town, west of the northern West Bank city of Jenin, and abducted Ibrahim Mousa Tahaina, and Maan Yahia Tahaina, both are former political prisoners, in addition to Mohammad Mousa Abu Shaqra.

The soldiers fired many live rounds into home of Ibrahimi Tahaina, before storming into it, and abducted him.

It related news, the soldiers invaded ‘Aida refugee camp, north of Bethlehem, and broke into the family home of a female detainee, identified as Yasmeen Abu Srour, 20, who was abducted by the army from her home, two weeks ago.

On Monday evening, the soldiers invaded the al-Hashimiyya village, west of Jenin, and abducted a young man, identified as Odai Mohammad Steiti, 24, from his home.