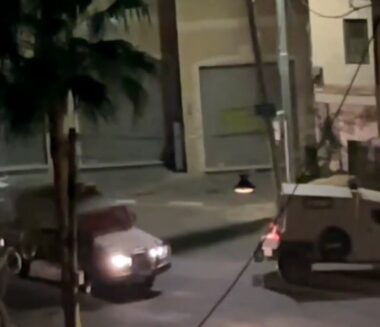 On Wednesday dawn, Israeli soldiers abducted at least ten Palestinians from several parts of the occupied West Bank, including the occupied capital, Jerusalem.

In occupied Jerusalem, the soldiers abducted a young man, Ahmad Rajabi, from his home in Silwan town, south of the Al-Aqsa Mosque.

In Bethlehem, undercover Israeli soldiers infiltrated the Deheishe refugee camp south of the city and kidnapped Mohammad Yousef Zaghari, 28, from his home before several army vehicles invaded the refugee camp to secure their withdrawal.

In Beit Jala city near Bethlehem, the soldiers invaded the Bir Oweina area, stormed and ransacked a home, and abducted a former political prisoner, Tawfiq Affana, 28, after repeatedly assaulting him, causing various injuries.

In Ramallah, in the central West Bank, the soldiers invaded Silwad town, east of the city, searched and ransacked homes, and abducted Mo’men Haroun Ayyad and Mohammad Hussein Hamed. Mo’men is the son of Haroun, imprisoned by Israel and serving a life sentence.

It is worth mentioning that the soldiers also invaded the Ramallah At-Tahta area, in Ramallah, and exchanged fire with Palestinian resistance fighters.

In Hebron, in the southern part of the occupied West Bank, the soldiers abducted two siblings, Habib Mohammad Sleibi, 22, and his brother, Mohammad, 20, a former political prisoner, after storming and ransacking their home in Beit Ummar town, north of the city.

The soldiers forced the family into one room while ransacking their home before abducting the two young men and confiscating the family’s car and a mobile phone.