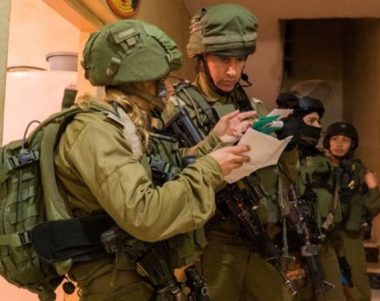 Israeli soldiers abducted, on Tuesday at dawn, at least thirteen Palestinians from their homes, in different parts of the occupied West Bank, and took them to several detention and interrogation center.

The Palestinian Prisoners’ Society (PPS) in the central West Bank city of Ramallah, said the soldiers invaded the al-Jalazoun refugee camp, north of the city, before breaking into and violently searching many homes, and abducted three Palestinian.

The soldiers also invaded Tulkarem city, in the northern part of the West Bank, searched a few homes and abducted Bara’ Jamal Swai.

The soldiers also abducted Omar Sharay’a, from the Old Askar refugee camp, in the northern West Bank city of Nablus, after stopping him at a military roadblock near Dir Sharaf village, west of Nablus.

In Hebron city, in the southern part of the West Bank, the soldiers abducted Yacoub Yusri Dari, after invading his home and searching it.

The soldiers also invaded homes in Beit Ummar town, north of Hebron, and abducted Waheed Ibrahim Abu Mariya, 21, and a child, identified as Amin Emad Sleibi, 15, after breaking into their homes and searching them.

It is worth mentioning that the soldiers have abducted 14 Palestinians, including five children, in Beit Ummar town since the beginning of this year.