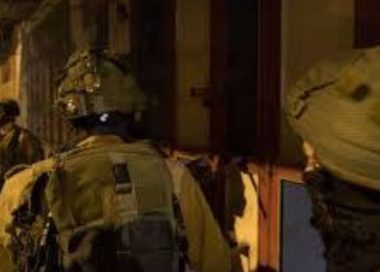 Updated: Israeli soldiers abducted, on Wednesday at dawn, at least thirteen Palestinians from their homes, after invading and searching them, in several parts of the occupied West Bank, and two others at a roadblock, the Palestinian Prisoners’ Society (PPS) has reported.

On Wednesday at noon, the soldiers installed a military roadblock near Arraba town junction, south of the northern West Bank city of Jenin, and abducted two young men.

The PPS said dozens of soldiers invaded, on Wednesday at dawn, the al-Am’ari refugee camp, in the central West Bank city of Ramallah, searched many homes, and abducted three Palestinians, identified as Mohammad al-Mahseeri, Thieb at-Turmustani, and Jihad Abu Hmeid, 30.

It is worth mentioning that Abu Hmeid is a brother of four detainees, held by Israel, identified as Nasser, Nasr, Sharif and Mohammad; all are serving life terms.

The soldiers detonated the front door jihad’s home, before breaking into it and ransacking it, and assaulted members of his family, including children, in addition to cuffing them during the invasion of their property.

In Jenin, in northern West Bank, the soldiers abducted Mahmoud Emad Kamil and Yazan Mughayer, from their homes.

In Nablus, also in northern West Bank, the soldiers abducted Tamer Taher and Khaldoun Zahi Khatatba, 25, from their homes, after violently searching them.

In Jericho, in northeastern West Bank, the soldiers also invaded homes, and abducted Ahmad Barham Barahma, 26, and his brother Mohammad, 16.

In Hebron, in southern West Bank, the soldiers invaded and searched many homes, interrogated several Palestinians while inspecting their ID cards, abducted a child, identified as Mahmoud Emad Abu ‘Assab, 15, in addition to Shehda Suleiman Jabarin, 40.

In related news, several fanatic Israeli colonists invaded lands in Madama village, south of Nablus, and uprooted them in preparation for new roads leading to Yitzhar illegal colony, which was illegally built on private Palestinian lands.