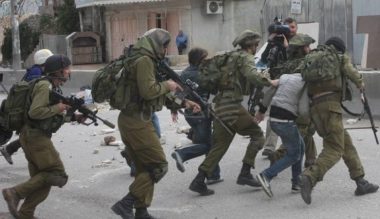 Medical sources said one Palestinian, identified as Ayman Farouq Obeidat, was injured when the colonizers hurled stones at his car, in Huwwara town.

They added that another Palestinian, identified as Aziz Bassam Dweikat, was also injured after the Israeli assailants hurled stones at his car, at a junction west of Nablus.

Israeli soldiers, who had been heavily deployed at and near these junctions following the death of an Israeli colonizer in the area on Tuesday night, did not attempt to stop the Israeli attackers. This forced hundreds of Palestinian cars to take longer, and largely unpaved roads, leading to Awarta then Beit town, to avoid the colonizers.

The closure caused huge traffic jams in the area, and many workers and students were unable to leave their communities.

The soldiers also isolated many Palestinian villages and towns in Nablus governorate, and initiated massive invasions and search campaigns, to locate the shooter or shooters, who killed an Israeli colonizer, on Tuesday evening, near Havat Gilad illegal colony, which was built on lands owned by Palestinians from Jeet village.

In Hebron, in the southern part of the West Bank, the soldiers invaded and searched homes in the ath-Thaheriyya town, south of the city, and abducted Shehda Suleiman Jabarin, 40.

The soldiers also invaded Hebron city, searched homes and illegally confiscated gold and cash from the home of Jassem Khairi Abu Rajab, after breaking into his property and violently searching it.