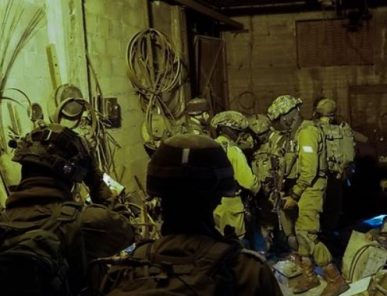 Israeli soldiers abducted, overnight and at dawn Monday, at least thirteen Palestinians in the West Bank, including seven from Shu’fat refugee camp, in occupied Jerusalem, the Palestinian Prisoners Society (PPS) has reported.

The PPS said the soldiers invaded and searched many homes in the Old City of Jerusalem, and Shu’fat refugee camp, and abducted seven Palestinians.

In Nablus, in the northern part of the West Bank, the soldiers abducted two Palestinians, identified as Rami Bilal Nouri, 20, and Adham Ali al-‘Amer, 20.

In Jenin, in the northern part of the West Bank, the soldiers abducted one Palestinian, identified as Yazan Shoubash.

In Bethlehem, the soldiers also searched homes and abducted Qussai Nael Taqatqa, from Beit Fajjar town, south of the city.

In Hebron, in the southern part of the West Bank, the soldiers searched homes and workshops, and abducted Ayman Nasser Salayma.

In related news, the Israeli army said it arrested one Palestinian in Hebron city, reportedly for running a weapon’s manufacturing workshop, located in a residential building in Hebron.

The army stated this was one of the largest workshops to be uncovered in the West Bank, and that it included 15 lathe machines, 70 rifle barrels, triggers and connectors, five magazines, M-16 rifle, and various weapon supplies, including large cache of bullets.

It estimated the number of persons working there to be between ten and fifteen, and that the workshop was concealed in a ground level of a residential building, where the owner and his family reside.